Barksdale, formerly known as Dixie, is on the Nueces River at the intersection of Farm Road 335 and State Highway 55, twenty-four miles southeast of Rocksprings in southeastern Edwards County.

The community is named for Lewis Barksdale, who patented a league and a labor of land in the area in 1847. Settlers moved into the area in the 1860s, and Barksdale moved to the site of the community in 1869. A settlement gradually developed there, and in its early years the community was called Dixie, for nearby Camp Dixie. By 1880 Dixie had a saloon, a hotel, and a small store. When the community applied for a post office in 1882, its residents were told that another community named Dixie had already secured that name, so citizens selected Barksdale as the name.

In 1884 the community had a population of twenty, and by 1890 Barksdale had two general stores and a grocery. School was held in a small house until a school building was erected in 1887; the new schoolhouse doubled as a church. Over the next two years a gristmill and a cotton gin were built in the town, and by 1900 Barksdale had 106 residents. The community received telephone service soon thereafter, a Baptist church was built in 1906, and a bank opened in 1907. Barksdale’s population was estimated at 200 through the mid-1940s. In 1948 the town had a school, a church, and five businesses, but by 1950 its population had fallen to an estimated 150. A Methodist church was built there in 1950, and a new high school building was built in 1957. By 1973 Barksdale consisted of the high school, two businesses, several dwellings, and a cemetery, and its population had fallen to seventy-one. The town grew dramatically in the late 1980s as a number of housing subdivisions were built there. In 1990 Barksdale had 617 inhabitants and six businesses. By 2000 the population grew to 1,081 with sixteen businesses.

Just north of the community of Barksdale is the Boys Scout’s summer facility Camp Fawcett. Opened in 1928, named for E.K. Fawcett, President of the Southwest Texas Council, Boy Scouts of America. The main hall is named for V.A. Brown, the Camping Chairman in 1930. Camp Fawcett lies on the Nueces River and is has stunning views and scenic spots of the Nueces Canyon. 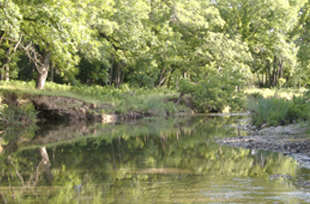 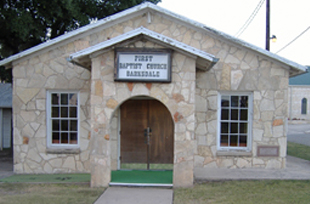 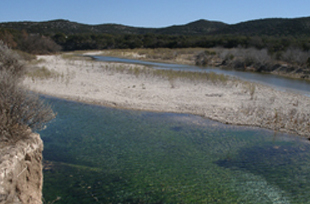